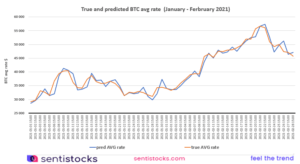 In our measurement of prediction accuracy, we made two assumptions. A prediction is considered accurate if: 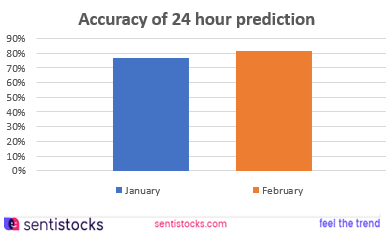 The average prediction performance of the BTC exchange rate in January-February 2021 was close to the 2020 level, that is, about 81%.

The high Bitcoin rate prediction accuracy allowed us to use the BTC price change signals from the 24-hour model in the investment process. In the beginning of January 2021, we set up an investment of $1000 to purchase BTC. We adopted a strategy called Following Predictions, trading 100% of the portfolio and reacting to predicted trend changes. We also simulated the commonly used HODL strategy in order to compare the results of both ones. 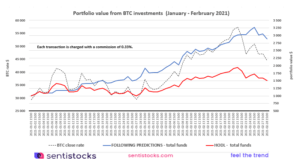 As you can see, the Following Predictions strategy turned out to be significantly more effective than HODL, in both January and February. This was due to the fact that our model successfully predicted periodic declines in the BTC exchange rate, which allowed to enter the FIAT currency in advance, avoiding capital loss.

The return on invested capital with the Following Predictions strategy reached level 188.4% at the end of February, compared to 51.2% for the HODL one.

A long-time employee of the banking sector. Specialist in management accounting and business valuation. He was a board member and financial director in production, service and financial entities.