8 basic emotions. Why so many?

8 basic emotions. Why so many? In this read we want you to meet the idea behind the unique solution that we came up with. It works wider than popular sentiment analysis tools used today for monitoring internet activities and more. Why? Instead of measuring sentiment, we focus on emotions. What does the emotion analysis offer that sentiment analysis does not? Why do we need as many as 8 emotions to describe, or even predict somebody’s state of mind, moods, future actions etc.? And what could you possibly learn whilst knowing them? Let us find out.

What emotions does Sentimenti analyse?

In Sentimenti we have implemented our tools for using Robert Plutchik’s model of emotions. It reveals 8 atavistic, adaptive emotions that help a human being (and any other life form) to survive and create the base for developing far more complex emotional experiences.

The Plutchik model contains two positive emotions: joy and trust, two ambivalent ones: surprise and expectation, and 4 rather, so to speak, negative: sadness, fear, repulsion and anger. Each of them has its meaning, leading the person into an action, praise, criticism, need or surprise. We discuss these emotions one by one.

What is the result? By analysing all the 8 basic emotions, we can precisely assess how much your brand differs in the eye of Internet users, trace down customer opinions on products and services, find out on searched phrases, respond quickly to a communication crisis or compare the company to competitors, amongst the others. But sometimes we also love to have some fun checking on the emotional change during and after popular TV shows display, examining stock market reports reactions, an impact certain political, social or cultural event has and so on.

Sentiment analysis of joy and sadness

Joy and sadness are like black and white, sweet and sour or light and the darkness – a simple division into positive and negative.

Joy reflects a wide range of positive reactions and is related with a smile, the moment when we simply like something. Understood this way, it seems to be similar to a “positive sentiment” (as interpreted by sentiment analysis tools), but the key here is the intensity. Commonly understood joy (“positive sentiment”) is associated with a strong positive reaction to something. Our solution focuses on and lets you find out about any praise components that influence the levels of joy. Including the everyday courtesy.

Sadness is opposite. It describes the loss, a sense of loneliness and the need of comfort, sometimes is even being referred to the person’s ask for help. Together with the joy it forms a contrasting pair in Plutchik’s emotion circle.

The Plutchik model has the psychological background. According to the researches, expressing both emotions at the same time with a similar intensity proves an internal struggle, a very mixed attitude of the text’s author to the subject. It means the person is in unhealthy or somewhat uncomfortable, confusing circumstances. The comparable intensity of positive and negative sentiment cannot be interpreted this way.

The interpretation of joy and sadness levels in this case are different than the levels measured by sentiment analysis tools. In Sentimenti we use two models of text overtones, so we can measure it all. We also count the relationship between different emotions and sentiment. A correlation (we use the r-Pearson measure here) greater than 0.6 is called strong, and close to 0.9 means that the two variables are basically the same. We always measure the relationship between joy and positive sentiment and sadness and negative sentiment for broader cntext and more precise data collection. Depending on the subject, positive or negative sentiment can take almost entirely from a single emotion, but also as the result of many different emotions being expressed by Internet users at once.

The results concerning sadness and joy do not have to be directly related to those obtained in the analysis of sentiment – which also shows that it is the result of many different emotions being expressed in the texts at the same time. We are able to tell you what possibly is behind the joy and sadness.

So now you know the joy and sadness are not just a simple sentiment, but can be developed from other, even complex emotions. We have taken a binary model and put I against the one with 8 categories. The two are already described, where are the other six? We will show what they do and why they differ from simple positive or negative sentiment.

Trust is expressing a sense of security, expecting something to happen the way we want to. It also covers a sense of community, a closer relationship, finding one’s place in the group, a feeling of mutual similarity etc.

Repulsion is an expression of disgust, strong criticism and aversion. When showing it, to us something is outrageous, alien or immoral. It is a strong emotion connected with the reaction of rejection and avoiding something. Many offensive nicknames that describe socially unacceptable groups are associated with repulsion.

Anger – another strong emotion, and very negative one. Instead of avoidance, it is associated with attack and sometimes leads into the aggression. In this way we express threats, but also dissatisfaction. It is accompanied by curses and shouting (in speech, in writing it can be expressed with stronger words).

Fear, as in life, is accompanied by danger, threat and risk. It is associated with escape, a desire to hide. It is also a cry for help.

Surprise comes up when our predictions don’t come true or something unexpected just happens to us. When combined with joy, it gives admiration, and with sadness – disappointment. It can have very different intensity, from a slight surprise to (also associated with fear) panic.

Expectation – the last of the emotions we describe. The opposite of surprise because it means making predictions and believing that they will come true. It can therefore be associated with anxiety or excitement, so it is also ambivalent.

Describing the overtones of a text, portal or brand awareness on the scales of 8 emotions gives you a lot of information. Sometimes only three emotions from the whole model may matter the most, but you will only learn this when having an insight into the whole experience’s spectrum.

First, the sentiment analysis is something different from the emotion analysis, yet we are talking here about two complementing models. Based on the results of one of them, one can predict to some extent the results of the other. Emotional analysis offers a much better insight into what actually checked texts communicate and what kind of consequences they may bring on. For example, an anger is a better catalyst for conflict or popularity loss than sadness. A decrease in trust is more dangerous than a decrease in joy. The graph above shows how different emotions are placed on information portals depending on their character and target group. 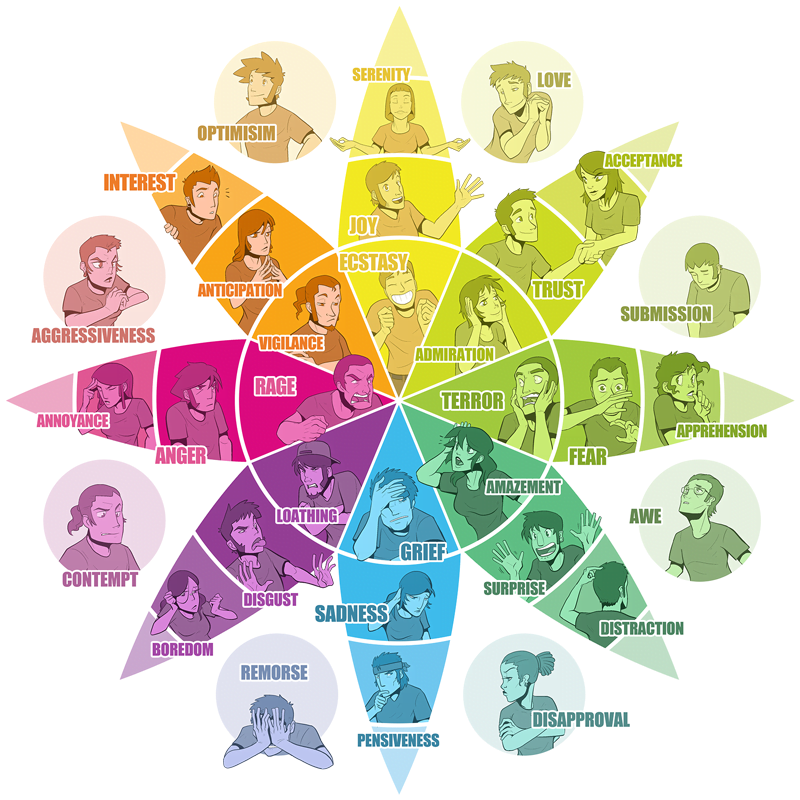 Individual emotions are not only differently described by us, but also differ qualitatively in the reader’s perception of the text (we examined it on 22 thousand people) and in the intention of its author. More trust does not necessarily mean more joy – these are very different feelings and can sometimes turn out to be mutually exclusive.

These are basic emotions, so they should be independent of each other. At the same time, they form a system and sometimes interact, even if one displaces the other. If you want to know more about emotion analysis, we have also written about go od practices to draw valuable knowledge from measuring emotions with Sentimenti tools.