Tesla split. Twitter’s emotional response with Kiyosaki in the background

Tesla’s shareholding strengthened the growth trend and Elon Musk, the company’s head, became the third richest man on the planet on 31 August 2020. As a result of this operation, his assets grew by 11.7 billion USD, to 125 billion USD. We decided to check the reaction of Twitter users to this event. There was an interesting happening on this social media channel which disturbed the overall result of the analysis of emotions.

In the result of the split, Tesla’s shares were divided 5:1. The valuation of Elon Musk’s funded company also increased by 12.6%, giving it a total of $464 billion. Whoever invested in the Tesla’s shares a month earlier, could have even earned as much as 74%. But why did the entire operation take place?

The decision to split was made for increasing the availability of Tesla shares and having small investors in mind. No wonder: one Musk’s share costed as much as $2200 by then and right after the split its price dropped to $440 only. The final price on that day reached $500, which was caused by euphoric increases after the split. It seems then that Elon Musk will knock on the S&P500 index soon. Obviously,  as the bull market on the company’s papers is amazing. Tesla has long since chased away the valuation of e.g. shares of a car manufacturer from Japan (Toyota, which produced 9 million cars in 2019 only). The frenzy that made Musk world’s third richest man seems to have no end.

The split took place on August 31, though the event has been announced earlier. It was nothing but a division into five pieces. That is why every investor, who had one share in the company, in the end received four additional shares for free. Why was this whole operation carried out though? Tesla’s representatives claim the company wanted also investors without the huge capital to be able to invest in their shares.

Tesla stock rises after the company announces a 5 for one stock split https://t.co/r67O2gKXiL pic.twitter.com/BXt5j8xqxN

An investor who is not an expert on financial markets already knows that Tesla is priced much higher than its competitors. Elon Musk’s shares set further quotation records. It is worth noting however, that Tesla is the most shortlisted company in the world and the investors would rather bet the share price to fall. Will the upward trend finally stop after the split? The psychological point of view is that there is still plenty of room for further growth! But from an economic point of view Tesla is worth more than a dozen (or so!) worldwide car manufacturers put together. Something is not quite right here… Elon Musk himself wrote on Twitter earlier in May this year that the valuation of his company’s shares is exaggerated.

Twitter’s emotional response to the split

The tools we use for predicting financial instruments’ prices have checked on Twitter’s reaction to the split. We examined original English tweets and retweets. This approach, as it turned out, was crucial from the emotional point of view. During the analysis we found out that the positive emotions caused by the split were disturbed by the mass giving of Kiyosaki’s entry, who in person criticized the operation by calling it as fake papers creation.

Look at the chart below. It shows the average daily intensity of the three emotions in English-speaking Twitter entries during the split of Tesla’s action. There is a clear decrease in the intensity of anger and fear and a growing sense of joy at a key moment. This shows a positive reaction to the event. However, this data does not include the above-mentioned confusion caused by Robert Kiyosaki. 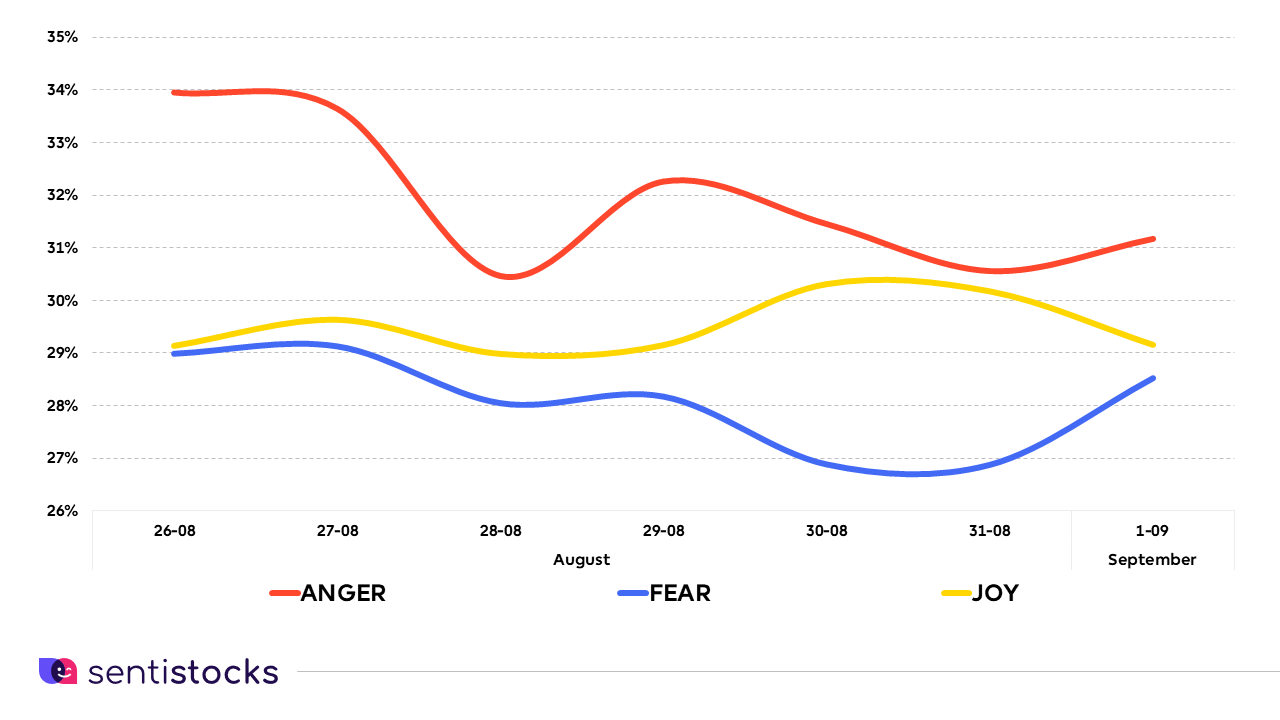 It is worthwhile to check the same data, but in more detail, i.e. with one hour accuracy. This is still data without considering the reaction to Kiyosaki’s entry. The variation of emotional intensity is quite large and ranges from 20 to 40%. Anger and fear correlate strongly. 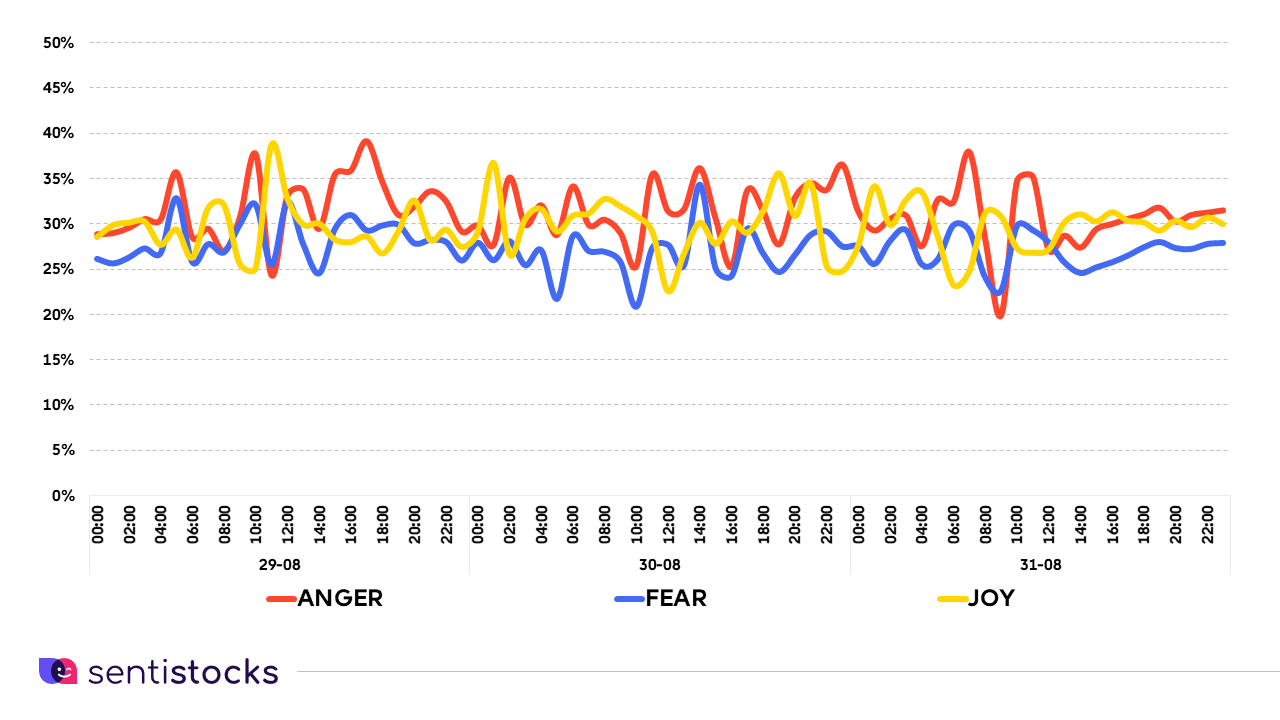 However, if we include the emotions in all the English language Twitter entries, we can see the joy has been clearly overshadowed at the crucial moment by the negative reaction caused by Kiyosaki’s mass tweeting. This triggered a sudden jump in the intensity of fear and anger, which lasted for many hours. This is the tweet below: 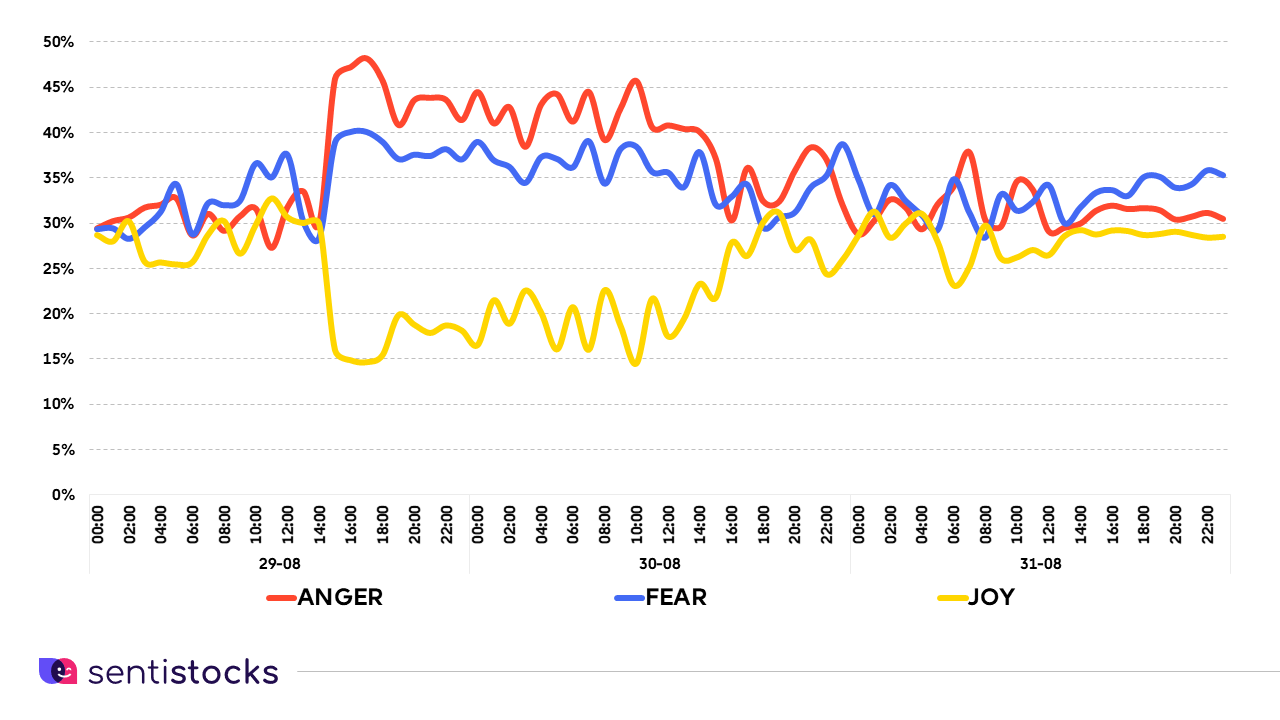 The Influencer Score also proves Kiyosaki stole the topic that day. His profile has reached its highest value. Below you can see the TOP 20 profiles with the highest Influencer Score in the analysed topic. 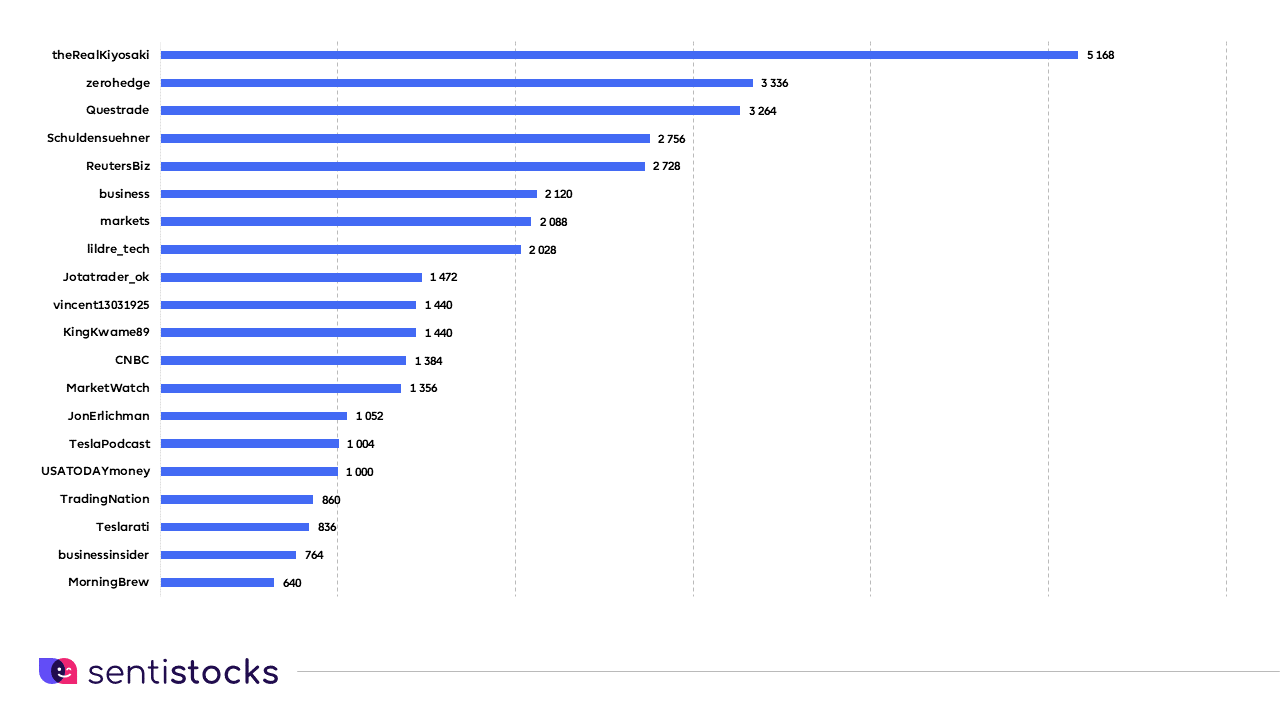 To recapitulate, the aforementioned tweet was liked and passed on further so many times that it disturbed the overall result of the study of the intensity of emotions. Therefore, to show the difference, we present the intensity of joy, anger and fear with and without Kiyosaki’s entry. This data proves even one social media entry could matter and have the impact on potential investors or stakeholders’ emotional reactions.

Not everyone understands the phenomenon of Tesla, including experienced investors. Is this a bonus for being a visionary?

The Tesla phenomenon is still difficult to understand, even by experienced players. Musk’s company is not an automotive concern as we know it. It has no regular customers and it seems it will not increase their base. Neither it is a powerful social network company like Zuckerberg’s Facebook. Tesla has undoubtedly followed in the footsteps of Apple.

Tesla officially passes Visa and moves into the 7th spot for most valuable company in the U.S. (behind Berkshire Hathaway).

Let’s recall that Apple announced a 4:1 share split at the end of July 2020. Financial analysts have no doubt the split is an operation that increases the access of small players with little capital to the market. However, in their opinion, it reminds of 1999, a speculative bubble on technology companies. It is impossible to hide – this valuation is abstractly high. According to the financial market experts, people perceive Elon Musk as the God or modern day’s Nikola Tesla. Are they right? Well, we shall see about that.

Elon and his lucrative company have set themselves ambitious goals, that is beyond dispute. But to change the world for the better for future generations, something more is really needed. We shall not be ignoring the lush imagination and a large dose of innovation, as these factors lead humanity into the unknown regions. However, it is right to be realistic: at the end of the day we are still playing with the real money here and now.