Credit Suisse. Bankruptcy or not? We predicted the Swiss bank’s share price declines with 88% accuracy!

Credit Suisse’s stock price has been on the decline for many months. Confusion over the bank’s financial condition is growing. There are further reports in the media about the potential insolvency of the institution, which is the second largest Swiss bank. Could its share price have been predicted? Yes – thanks to artificial intelligence.

Safe as a Swiss bank. Credit Suisse CDS price is a real trouble

Credit Suisse’s stock price has been on the decline for many months. As Sentimenti deals with, among other things, predicting the prices of financial instruments or cryptocurrencies, we decided to take a look at the atmosphere and mood on the web around Credit Suisse. 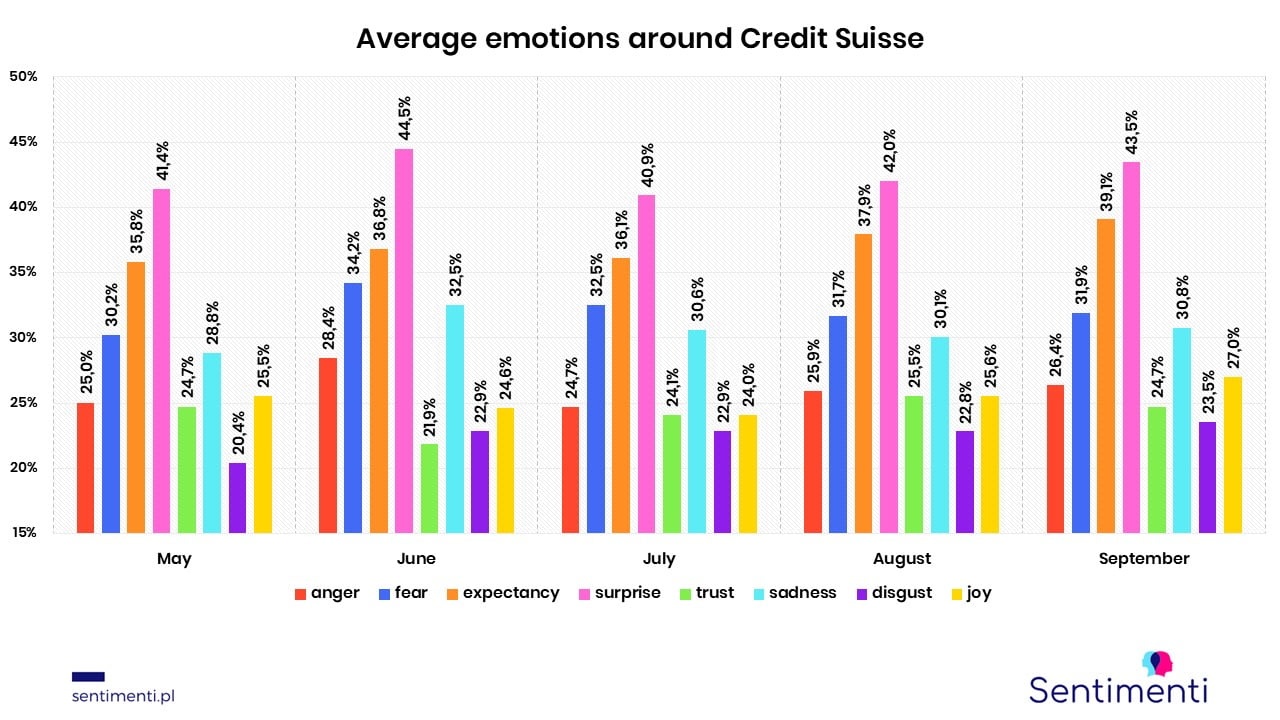 The analysis looked at the level of intensity of emotion and emotional arousal among authors of online opinions and comments, which were written in English and German. That’s a total of more than 40,000 mentions from May to September 2022, which our artificial intelligence looked at. The results are surprising.

A detailed analysis of the content of the entries showed that the entries characterized by a high intensity of these favorable emotions are those expressing – generally speaking – satisfaction with Credit Suisse’s troubles. This state of affairs significantly affected the level of the correlation index of the intensity of emotions and the bank’s stock price.

The study of emotion diads (which form according to Pluchik’s theory) also leads to interesting observations, including showing how market attitudes changed. Thus, emotions correlated most strongly with Credit Suisse stock prices:

Using Pearson correlation coefficient analysis, the interaction between stock prices and the intensity of emotion around Credit Suisse on the Internet was examined. 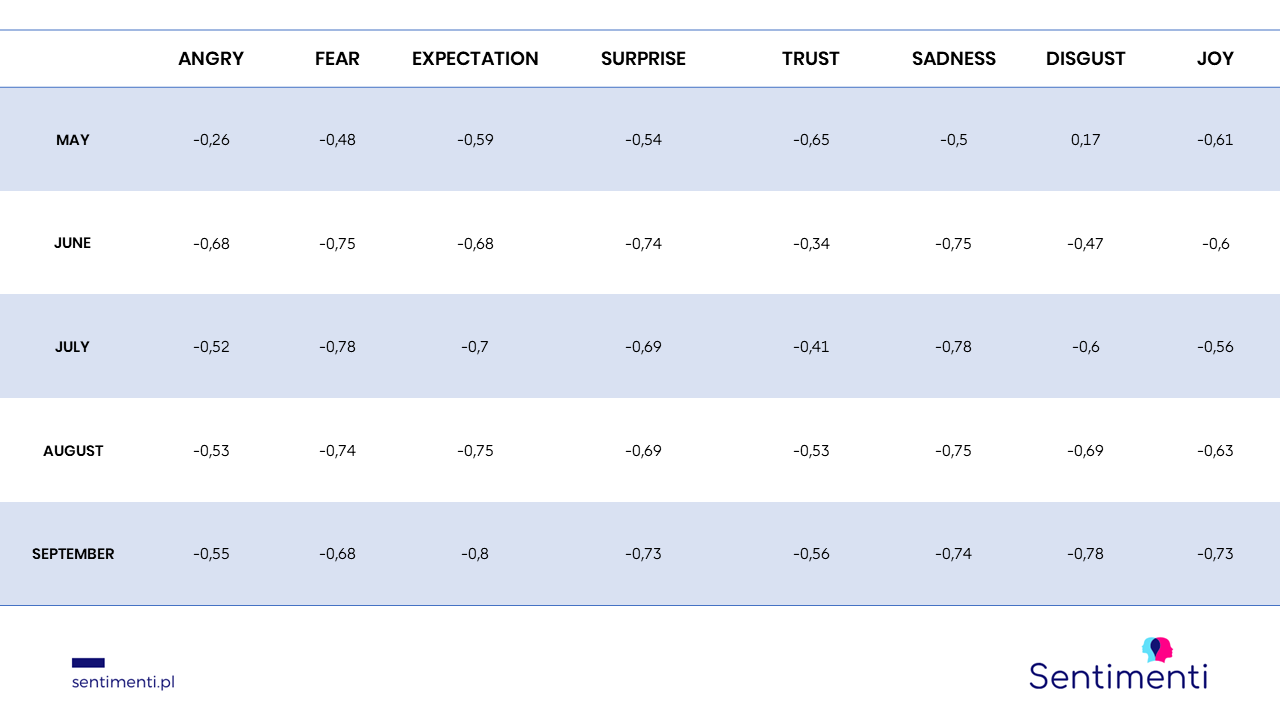 Credit Suisse problems. Are we in for a repeat of Lehman Brothers?

The analysis showed that there was a rare case where all emotions (including those considered positive) correlated negatively with Credit Suisse share prices. This meant that, in this case, a recorded increase in the intensity of emotions was linked to a decrease in share prices. In September, the strongest correlations with the share prices of Switzerland’s second largest bank were revulsion and expectation forming – according to Pluchik’s theory – a diad of cynicism.

A prototype stock price prediction model was fed for Credit Suisse with financial data (share prices) and data on the intensity of emotions, sentiment and emotional arousal around the company. A model built on an artificial neural network using BiLSTM (bidirectional long short-term memory) was used. 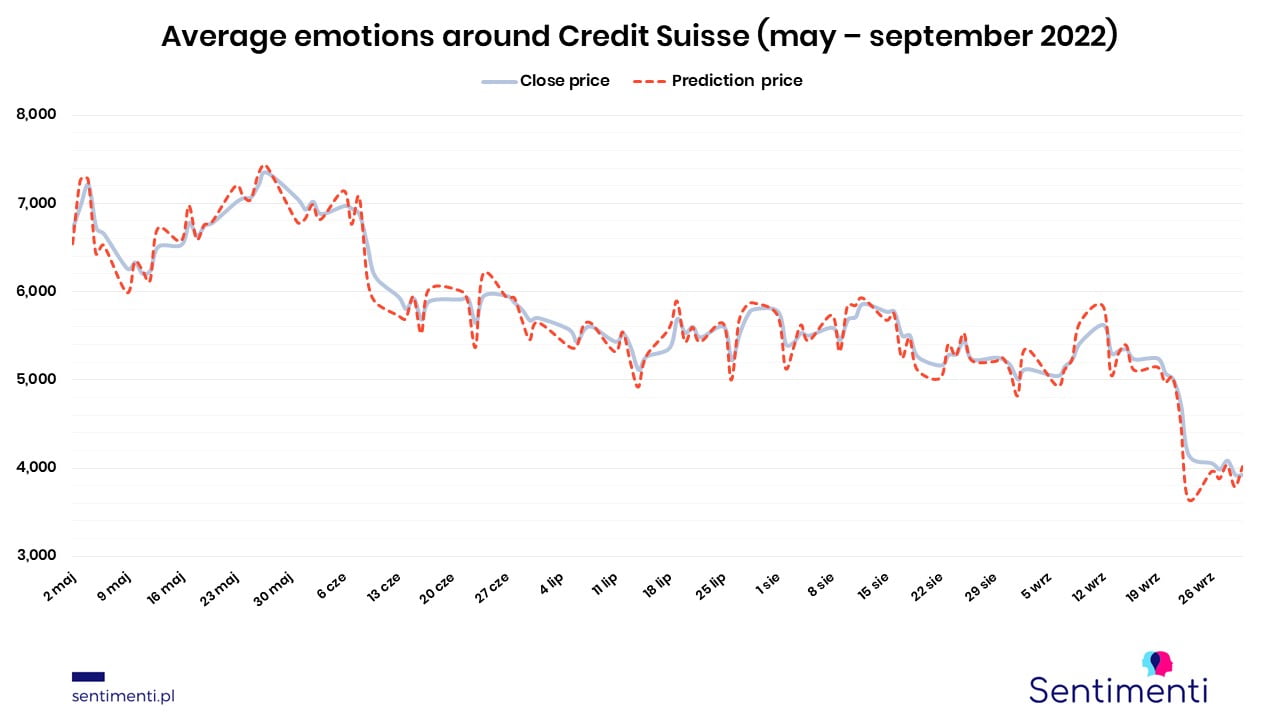 Using our predictive model (Sentistocks service), a success rate of up to 88% in predicting the trend of Credit Suisse’s share price over the period under study was achieved. This shows that potential investors could have successfully predicted the quotation solely on the basis of online discussions about the bank’s financial situation.

Investors remember the great collapse of Lehman Brothers. 14 years ago, it contributed to the outbreak of the global financial crisis. Will Credit Suisse face the same finale? We do not know. But the cost of CDS (insurance against bankruptcy) for the institution has approached the highest levels in almost 15 years. The bank itself foresees bumpy times ahead.

Sentistocks has developed effective predictive models for instruments in the cryptocurrency market. These models use both financial and emotive data to predict future prices (rates). The high success rate of the predictions developed with our tool confirms the huge role played by emotions in financial markets.

A long-time employee of the banking sector. Specialist in management accounting and business valuation. He was a board member and financial director in production, service and financial entities.